Earlier this year, any citizen could visit the AAFCO website and find their state feed control official who currently participates in this private corporation. AAFCO has apparently publicly removed the names and contact information of state feed control officials who are involved in and helping to operate this “private corporation.” This private corporation of public regulators isn’t always the most “transparent” group of people, and this recent move is one more display of angst public regulators are having against citizens who are questioning this shadow government organization.

In the below photo, you can see the old version of the AAFCO website, which clearly shows that George Ferguson is the main state feed control official contact. 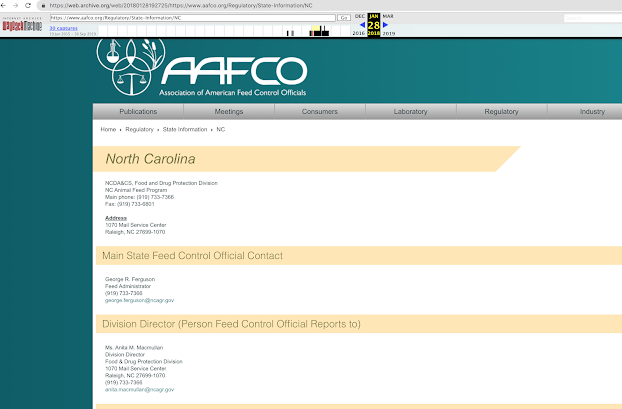 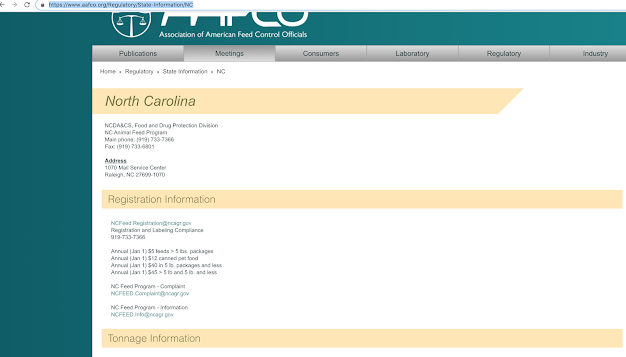 Over the past few years, a growing number of citizens have bene questioning and challenging the public regulators who are performing rule making and regulatory work via this private corporation umbrella. State and federal public regulators refuse to hold public regulatory meetings, and instead continue to develop ingredients, definitions, and model regulations at “private” meetings, out of compliance with the federal administrative procedures act.

State and federal regulators probably don’t want citizens to know that what they do at this “private corporation” could actually be done publicly at the federal level. Given that the sole purpose of “AAFCO” is for states to have “commonality” in pet food ingredients, this could be accomplished at the federal level with public meetings. Any federal regulation could then be adopted “by reference” by any state.

Don’t expect state regulators to perform their regulatory work publicly anytime soon though. FDA and their state “partners” are continuing to refuse to hold regulator public meetings where pet food ingredients and regulations are promulgated in accordance with the administrative procedures act. They are instead mainly planning to continue to engage in this type of regulatory work through their private “shadow government” corporation called AAFCO, where the process is kept as private and out of view of the public as much as possible.

Popular posts from this blog

April 28, 2021
Today, FDA confirmed they would not be granting phone call requests in relation to longstanding and ongoing regulatory issues with aflatoxin in dry pet foods, mainly dry pet foods produced with the ingredient corn.  For years, Dr. Steven Solomon and other federal employees of FDA-CVM (Center for Veterinary Medicine) have continuously refused to speak to consumers, consumer groups, and members of the educational field regarding the myriad of issues surrounding various regulatory actions by FDA-CVM. Why wouldn't the FDA-CVM want to have open, honest, and continuous dialogue with the regulated consumers, or with the veterinary field?  For years, FDA-CVM has been regulating the pet food industry by what they call their "opinion", instead of a properly passed rule. It has also been discovered that employees of FDA-CVM held secret meetings with the major grain and dry pet food lobbying group AFIA, where FDA-CVM actually worked with AFIA to stifle regulations that would have bro
9 comments
Read more

April 22, 2022
Years ago, I had a back and forth with FDA where the media department refused to specific whether "raw" pet food that had been subjected to HPP (high pressure pasteurization) had been subjected to a kill step or not. The FDA stated "HPP can be a kill step when effectively done, however, it must be properly validated to confirm the effectiveness in a pet food product. " I then asked FDA: Please define or provide me documents on "when effectively done" means as per FDA.  What does FDA deem to be properly validated to confirm the effectiveness in a pet food product? Does FDA approve a pet food company's use as HPP as effective or non effective before they implement this in their foods? After FDA-CVM refused to provide me further information, I filed a FOIA request with the agency for records on this matter. I eventually had to sue the agency under FOIA law, and force the agency to comply with my FOIA request. Years later, I finally have what FDA-CVM is st
Post a Comment
Read more

November 20, 2021
WHY WOULD TWO WOMEN LEAVE THEIR OWN PET FOOD COMPANY? According to court documents, Roxanne Stone and Jacqueline Hill left Lystn and its Companies because Keith Hill was self-dealing by paying himself additional fees and profits through Lystn to his own independent consulting company; Roxanne and Jacqueline would have stayed with Lystn and Companies if Keith would have stepped-down as CEO, which they had requested because of his potential misconduct.  According to court testimony, Roxanne Stone and Jacqueline Hill had multiple meetings and attempted to rectify these serious issues prior to finally disassociating from the company they pioneered .  KEITH HILL AND DERRICK HILL REMAIN SILENCE REGARDING MONETARY MOVES Keith Hill's lawyer currently appears to be trying to make people believe that "all the facts" were reviewed in this case. However, the misconduct allegations of Keith Hill, which appear to be the very heart of why Jacqueline and Roxanne left Answers Pet Food, ha
Post a Comment
Read more